Sour gas sweetening is one of the most important natural gas refining processes, which is done to remove acid gases such as H2S and CO2 in order to reduce the corrosion rate, improve the gas quality, reduce the toxicity of catalysts, etc. Alkanolamines such as MDEA, DEA and mixtures of MDEA/PZ and MDEA/DEA are used as the most common chemical solvents for natural gas sweetening.

Prediction of H2S and CO2 solubility and examining the accuracy of such a thing is highly essential to design and simulation of natural gas sweetening units. Major studies done in this research were focused on validating the last thermodynamic packages of Aspen One Software (V 8.3). Some of these models modified to predict the equilibrium behavior of electrolyte solutions have been established based on two separate methods. The first method, known as Correlation-Based approach, includes two thermodynamic packages of “Amine” and “APISour”, which are embedded in the thermodynamic models series of Aspen HYSYS application. The second method, known as Activity Coefficient Model-Based approach, has improved the accuracy of simulation results than ever based on theoretical foundations and using experimental data. Meanwhile, several thermodynamic packages such as ELECNRTL and ACID GAS are established based on the second method, which include data required for equilibrium calculations of gas mixtures, acid gases and amine solutions.

As mention before, many studies have already been done on predicting the solubility of acid gases in amine solutions. Deshmukh and Mather (1981) used the activity coefficients model to predict the solubility of H2S and CO2 in amine solutions [1]. Posey et al. (1996) used a simple model for prediction of acid gas solubility in alkanolamines [2]. Prashanth Patil et al. (2006) evaluated the solubility of H2S and CO2 in MDEA aqueous solution by the extended model of Kenneth Eisenberg [3]. Huttenhuis et al. (2009) examined the Solubility of Carbon Dioxide and Hydrogen Sulfide in Aqueous MDEA Solutions [4]. Ying Zhang et al. (2011) also examined CO2 absorption in Aqueous MEA and MDEA Solutions with electrolyte NRTL model [5, 6]. According to development of chemical process simulators in the last years, many of studies are focused on comparison of them together. For example, a comparison of computer simulation results of reactive distillation obtained by Aspen Plus and HYSYS software was done by Smejkal in 2002 [7]. Edwards (2008) used the combination of various equations of state and activity moles for selection of a suitable thermodynamic package for the prediction of the enthalpy and the components distribution ratio [8]. Julio et al. (2009) did another comparison between Aspen Plus and HYSYS for validation of their physical property data banks in ammonia synthesis process simulation [9].Because one of the main applications of amine solutions is CO2 removal from gases, therefore the accuracy of the absorption column simulation is very important. Hansen et al. (2011) compared the Aspen HYSYS and Aspen Plus softwares accuracy in prediction of CO2 absorption by MEA solution [10]. Erik Øi (2012) did a same work but this study was focused on CO2 removal from exhaust gas [11]. He also compared Aspen HYSYS and Aspen Plus simulation of CO2 Absorption into MEA from Atmospheric Gas in the same year [12]. Since 2013, a new option (acid gas cleaning) is added to Aspen HYSYS software that its producer claims this package uses rigorous rate-based calculations and a new property package to deliver unprecedented accuracy and predictive results to amine-based absorption processes [13]. This paper investigates mentioned claim and provides a comparison between Aspen Plus (V8.2) and Aspen HYSYS (V8.3) thermodynamic packages.

Using thermodynamic relations based on classical concepts of phase equilibriums is an approach resulting in the prediction of dissolved gases distribution pattern in aqueous amine solvents. However, the use of parameters such as fugacity and activity is close to the physical senses more than theoretical concept of chemical potential.

For each component in the mixture, the fugacity equality of liquid and vapor phases resulted from thermodynamic equilibrium provides the possibility of using distinct thermodynamic models for the phases. Therefore, the fugacity in each phase has a different form in such a way that to predict the vapor phase fugacity coefficients, an equation of state will be used, while an activity model is used for the liquid phase. In the following, the calculation methods of vapor-liquid equilibrium condition by equations of state and activity model in thermodynamic packages of ELECNRTL and ACID GAS are discussed.

But what has distinguished this thermodynamic package compared to other similar types, is the use of modified Electrolyte NRTL model to calculate the activity coefficients of the components in the liquid phase. The model proposed by Chen et al. [14], introduces the amount of excess Gibbs energy of the components in non-ideal electrolyte solutions, including two main parts that one is related to the local molecules and ions interactions (LI), and the other is related to Long-Range Ion-Ion Interaction (LR). It should be noted that in predicting the equilibrium behavior of electrolyte solutions, determining the ionic components amounts is of great importance, which is usually done by defining ionization reactions with inclusion of synthetic data or equilibrium constants. Kinetic and equilibrium data of these reactions are presented in [15].

In Aspen Plus software package, several databases are available for thermodynamic calculations, which provide the possibility of using a different set of interaction parameters of ELECNRTL model and Henry constants. Among them, three special information packages, namely as KEMDEA (Kinetic Equilibrium MDEA), KMDEA (Kinetic MDEA) and PMDEA (Posey MDEA) were imbedded that each would be used tailored to a specific usage and given the limits of experimental conditions for methyldiethanol amine solutions. The calculation basis of components activity coefficients in the liquid phase is the Electrolyte NRTL model for all the packages which their interaction parameters have been recalled from different databases. The main difference between the KMDEA and KEMDEA packages is in the equation of state so that the RK equation of state was used in the KEMDEA model, while the SYSOP15M equation of state was used in the KMDEA model. The PMDEA model developed based on the results of Posey et al. (1997) studies has considered two parameters of PH and electrical conductivity coefficient of the solution in estimating Henry constant parameters in order to eliminate measurement error of acid gases solubility, especially at low solubility rates [16]. Since the poor solubility changes can cause significant changes in PH and the value of solution electrical conductivity, thus, less error would occur in the measurement values. Finally, by including the PH and electrical conductivity, Posey and Rochelle provided new parameters for the calculation of Henry constants. In this study, three ELECNRTL thermodynamic packages of Aspen Plus software subset used different KEMDEA, GLOBAL and PMDEA databases to recall the interaction parameters and Henry constants were evaluated. It should be noted that the GLOBAL database includes default values of the software.

As previously mentioned, the accuracy of estimation of molar fraction of molecular and ionic components considered in the equations in activity models are based on the accuracy of kinetic data and equilibrium constants of the existing chemical reactions. The Aspen Plus software package uses several reactions for ionization of acidic components and amine solutions that is presented in [15].

This package imbedded in the Aspen HYSYS (V 8.3) thermodynamic models for prediction of electrolyte solutions equilibrium behavior. This package has used the Electrolyte NRTL model to calculate the activity coefficients of the components in the liquid phase and the Peng-Robinson equation of state to calculate the vapor phase fugacity coefficient. Since the mentioned thermodynamic package have been developed merely for simulating the natural gas sweetening processes, thus, the parameters of the Electrolyte NRTL model in the ACID GAS package have been modified and embedded for gas sweetening process. In this thermodynamic package, according to recent studies, the possibility of using and examining the mixed amines has been also provided, and the relevant parameters have been calculated for each compound separately (Such as MDEA- PZ, Sulfolane-DIPA and MDEA- Sulfolane). The most important difference between ACID GAS software package and the ELECNRTL package is in the calculation of the vapor phase fugacity coefficient. Here, unlike the ELECNRTL model using the RK equation, the PR equation of state was used.

A wide range of experimental data is needed to support validation of thermodynamic packages (ACID GAS, ELECNRTL). Since 1930 a large number of experimental solubility data for hydrogen sulfide and carbon dioxide in aqueous amine has been published and presented by several investigators. Table 1 gives and overview on the previous results for these gases solubility in MDEA solution. 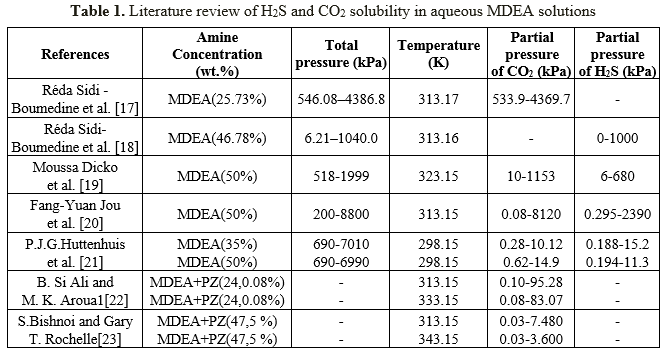 In this study, the simulation results of an acid gas-MDEA equilibrium stage (flash drum) by mentioned packages included in the Aspen Plus software (KEMDEA, PMDEA, and GLOBAL MDEA) and Aspen HYSYS (ACID GAS) were compared with experimental data. The results are presented in Figures 1 to 5.

Evaluation the solubility of CO2 in the MDEA solution in absence of H2S shows that the special data package of PMDEA compared to other Aspen Plus packages has a better estimation capability. However, the ACID GAS package predicts the CO2 solubility as well as PMDEA (Figure 1a).

The results of H2S solubility in MDEA solution in absence of CO2 indicate the lower accuracy of ACID GAS package compared to other packages. Assessment of results in Figure 1b shows that the error has occurred in high acid gas solubility, but in the low range of solubility, the results obtained from the thermodynamic ACID GAS package have enough validity.

3.1.2. Solubility of CO2 and H2S Simultaneously in Aqueous MDEA Solutions

Since in sweetening processes, both H2S and CO2 components are usually present in the sour gas stream, thus, investigating the estimating ability of their interaction effect on solubility by thermodynamic packages is of utmost importance.

Comparison of modeling results with experimental data in Figure 6, suggests the weakness of ACID GAS package to prediction of CO2 solubility in activated amine solution. As can be seen from experimental condition presented in Figure 6, the mass fraction of Piperazine in the solution is less than 1%, while industrial reports indicate that the mass fraction of Piperazine in gas sweetening processes is between 3% and 7%.

According to the Aspen Tech Company's claim regarding the enhancement of the ACID GAS thermodynamic package, a collection of experimental points based on gas processing operational data were used to evaluate the ACID GAS package [13]. Figure 7 shows that the accuracy of CO2 solubility prediction by ACID GAS package found to increase with increasing Piperazine concentration to 5 weight percent (gas processing operational range). However, the estimation capability of CO2 solubility by Aspen Plus thermodynamic packages greatly reduced with increasing concentration more than 1 percent.

In this study, the prediction accuracy of H2S and CO2 solubility in aqueous MDEA solutions and MDEA/PZ solutions has been investigated by using of two different packages (ELECNRTL and ACID GAS). The investigations result showed that using of ACID GAS thermodynamic package has more validity specially for predicting of low solubility in wide range of MDEA solution concentration. The results also show that the accuracy of CO2 solubility prediction by ACID GAS package is more than other packages when the Piperazine concentration is in the operational range of gas sweetening processes (3 to 7 wt. %).

This project was carried out within the Research stream on optimization studies of BIDBOLAND gas refinery. The authors wish to thanks the refinery research unit officials for their valuable contributions, financial support of this research project and providing all necessary operating information. 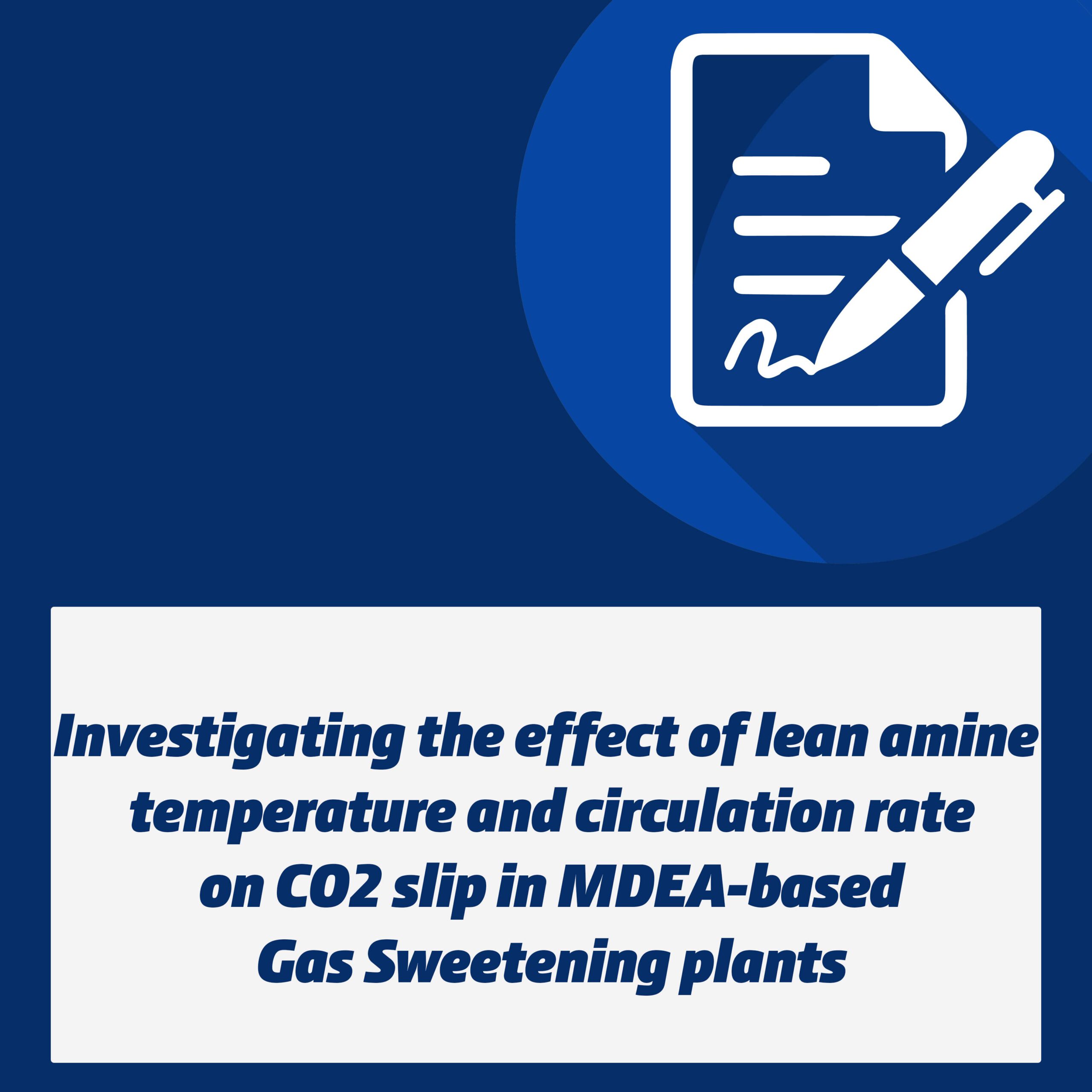 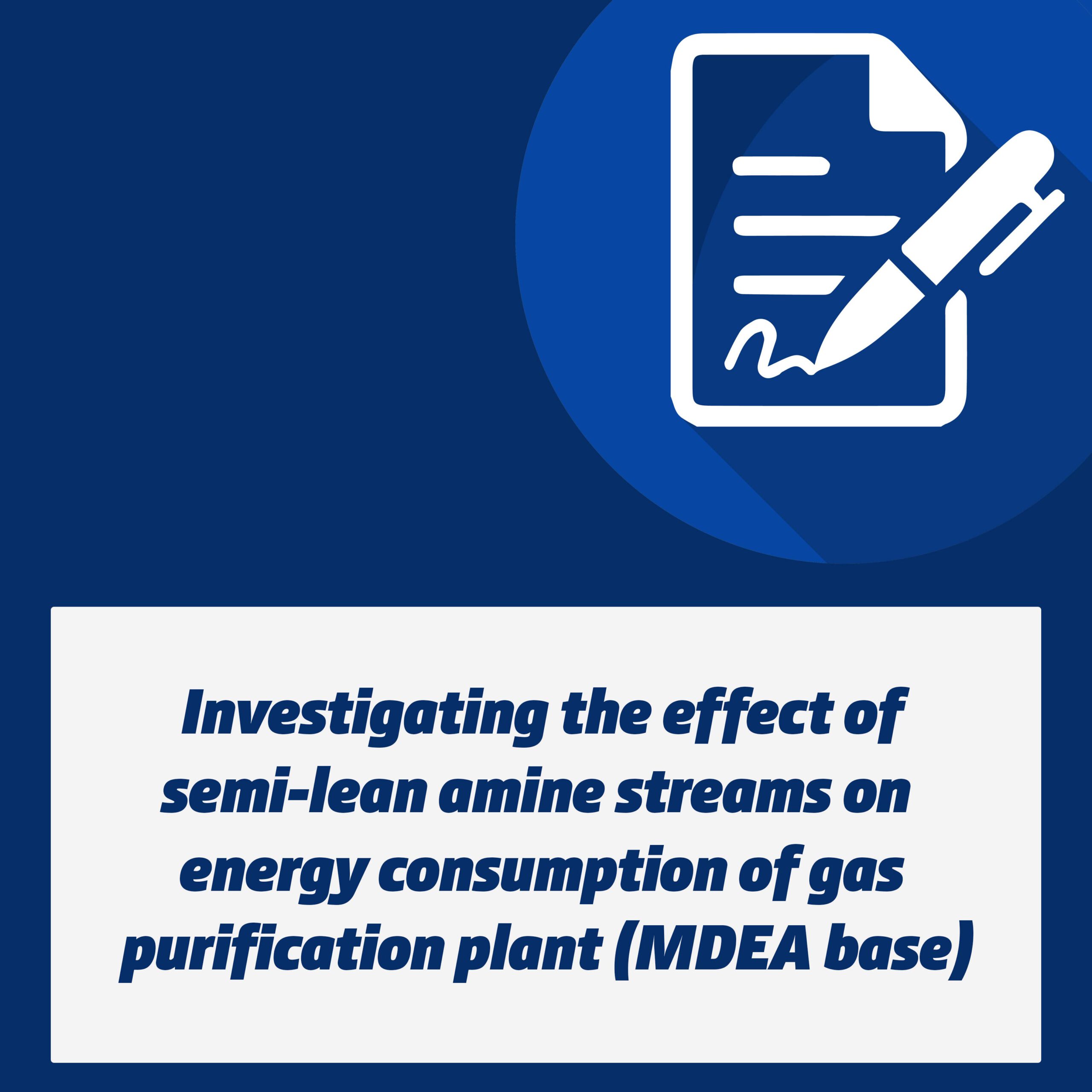 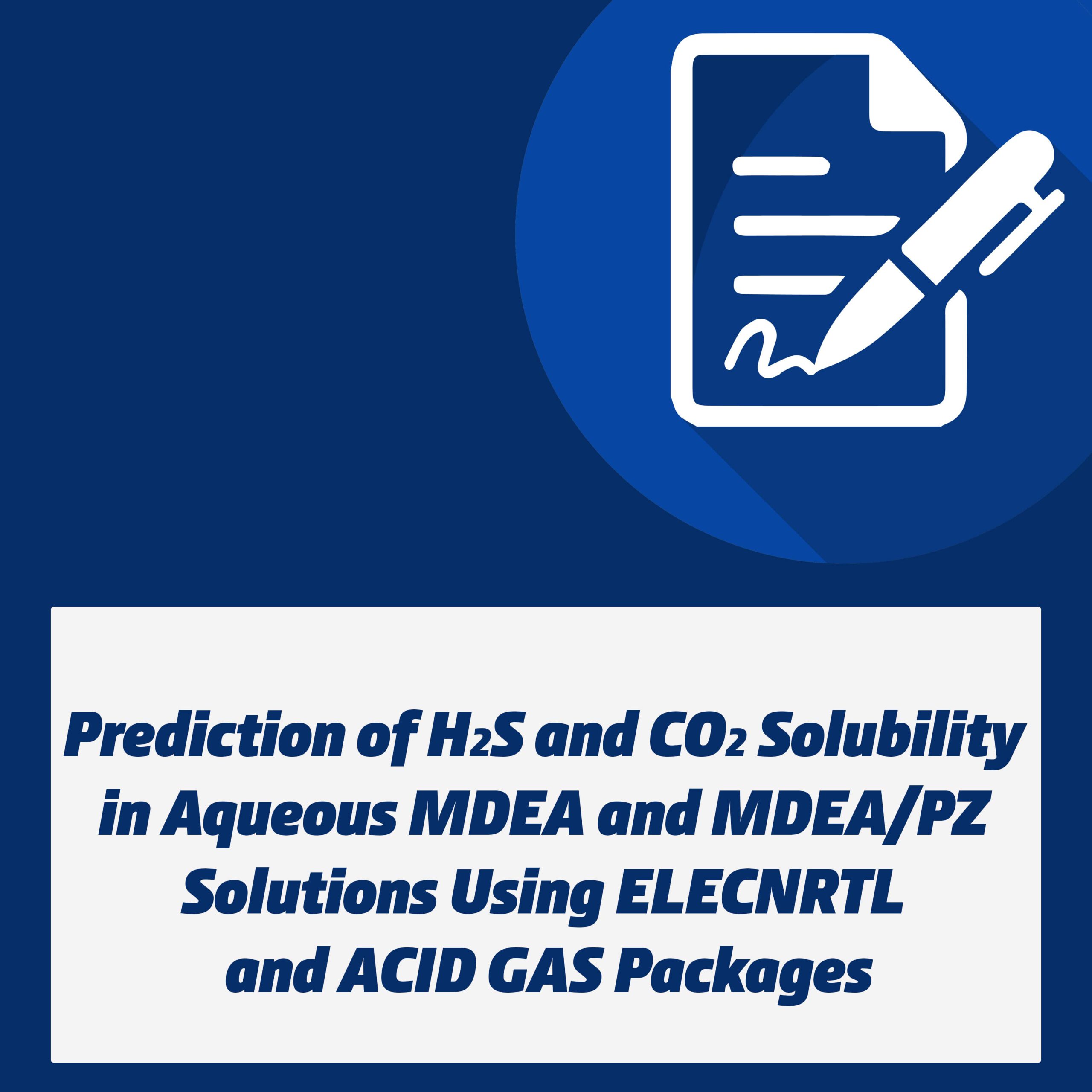